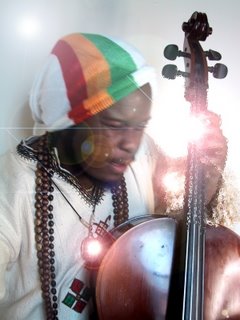 It's long been a running joke that myspace is full of crappy bands trying to be your friend. After being on myspace for a little over a year, I can attest that this is no joke my friends, but pure reality. Gems from unsigned or undiscovered artists are very hard to discover on myspace and it is very rare that one of those artist profiles sticks out. I want to share with you one of the profiles that do stick out.

I've met Khari Lemeul. I've seen him perform at an open mic. Hell, one of his bands even opened up for my band at the Hothouse. I've always known that he was very talented and a capable multi-instrumentalist, but when performing live, one can only play one instrument at a time. Lemuel's talent is immensely magnified when one is listening to the recorded songs at www.myspace.com/lemuelism. The sound quality and production values are definitely more sophisticated than your average artist profile on myspace, but beyond the technical and studio wizardry lies an earthy vibe that transcends you back to the days when Sam Cooke and Otis Redding ruled the charts. Sam Cooke is the most apparent connection when listening to "My Soul Is Happy."It could have easily been the B-side to "A Change Is Gone Come" with its somber string arrangements and Lemuel's soulful tenor. Although Lemeul is recreating a sound that was popular over 40 years ago, it is a sound that has rarely been revisited since then. After listening to the impressive songs on his myspace page, you'll wonder why it isn't revisited more often.