Since we're in the Cloud Age, where things are headed more and more towards streaming seemingly everyday, I have to expand the definition of what exactly qualifies as a single. For the purpose of this list, any song that was uploaded to Soundcloud by the artist or their record label automatically qualified, even if it wasn't for sale or didn't have a video. By far this was the most most intimidating year to put together a singles list because there always felt like there was something new right around the corner that I might have missed, which is thrilling for a music fan. I've included a Spotify playlist of the songs and for those that weren't on there, I've included an asterisk (*) to help you out. If it's not on there, it's likely on Soundcloud and if it's in the top 100, I'd especially recommend putting forth the effort to search for it. Make sure to check out my albums list as well. 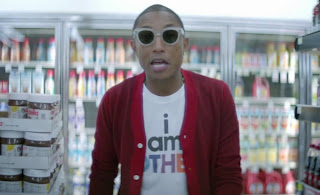 "It might seem crazy what I'm about to say." Hard to believe that we're at the point where we have to almost apologize for being in a good mood. Often times, I find songs dedicated to joy to be the most fearless in today's cynical world and there are fewer that blare the horn of happiness louder than this one. For the purpose of full disclosure, The Neptunes are among some of my favorite artists of all-time, so there's always something welcoming for me when one of them hits their stride. Regardless, I think anyone would have won me over with such a jubilant gospel shuffle. It's a solid foundation to start with, but then there's that chorus. That sunny, carefree, defiant, Nobel Peace Prize-worthy chorus. So pure in its mission to save the world and help you leave negativity behind that it even brought along hand claps to ease the transition. It's true power isn't revealed until towards the end of the song where its repetition is so forceful that it won't be satisfied until vessels burst in your cheeks from smiling too hard. Music is at its best when the artist can project their feelings onto you and you're able to empathize. "Happy" was the best such example this year for me.

Once again, here are my top 50 albums of the year. I've also included a Spotify playlist with selected tracks from as many as albums that were available on there. The amount of good music out there is so overwhelming that there are probably another 50 albums that had a shot at cracking the list that I didn't have time for. My head will likely explode one year when doing this post. Until then, enjoy!

Who isn't a fan of Loveless? To this day, it stands as one of rock's seminal albums and no matter what the moment, it's usually in my top 5 of all time. It was with that excitement, shared along with so many other music fans around the world, that I was looking forward to My Bloody Valentine's follow-up to that album, which was 22 years in the making. So yes, this is coming from the perspective of someone who was destined to enjoy m b v in one fashion or another, but the record is its own kind of monster. No matter if you've never heard one strain of their blurred melodies or the jagged crunch of their feedback, nothing can be taken away from moments as gorgeous as "Who Sees You" and "Only Tomorrow," which are indeed awash in a familiar sea of haze, beauty and chaos, but no less effective in the 2010s than it was in the '90s. Beauty is actually the one word that keeps popping up in my head whenever I revisit this album and it's the most fitting. My Bloody Valentine has never been about "beauty" in the traditional sense where we perceive it to be something that's symmetrical and pleasant, but by using elements that are more fitting for a mosh pit or a surrealist painting, our senses are challenged for the better. We're left with a piece of work that alters the colors we see, that soothes amidst the dissonance and ultimately gives us new respect for waiting patiently.

2014 Grammy Nomination Predictions: Album of the Year & Song of the Year

The nominations for the 56th Annual Grammy Awards will be announced this Friday, Dec. 6, on a live concert special airing on CBS. The award ceremony itself will take place on Jan. 26, 2014. As usual, I will try my hand at predicting who will get nominated in the four general field categories: Album of the Year, Song of the Year, Record of the Year and Best New Artist. Today, I'll take a look at Album and Song of the Year. I already made predictions for ROTY and Best New Artist yesterday.

The conversation for the 2014 Grammys ends and begins with Justin Timberlake. Not only has he been nominated in this category twice before, but he also brings that magical combination that the NARAS (National Academy of Recording Arts & Sciences) loves to acknowledge: popularity and respect (i.e., Adele, Alicia Keys, Lauryn Hill). Submitting both of his albums as one shouldn't hurt his chances, even if Part 2 was seen as a creative disappointment. As of right now, The 20/20 Experience is in the lead to win this whole thing.

By that same logic, I also like the chances for Bruno Mars' Unorthodox Jukebox. I think he's one of the few current pop superstars where the music is strictly the main attraction concerning them. Image and headlines have played such a small role in his success, which is something the Grammys will likely take notice of. Having him here won't tarnish the respectability of the category.

In that same vein, Taylor Swift's Red, with the best first week sales in a decade, also seems likely to get a nomination. The difference between her latest one and Speak Now—which did not get an Album of the Year nod despite gaudy first week numbers as well—is that there are more songs that the general public can identify with.

The nominations for the 56th Annual Grammy Awards will be announced this Friday, Dec. 6, on a live concert special airing on CBS. The award ceremony itself will take place on Jan. 26, 2014. As usual, I will try my hand at predicting who will get nominated in the four general field categories: Album of the Year, Song of the Year, Record of the Year and Best New Artist. For today's post, I'll examine the races for Record and Best New Artist while tackling Album and Song of the year tomorrow.


Record of the Year

Just to clarify for those reading tomorrow's post as well, Record of the Year goes to the artist, producers and engineers who worked on the actual recording while Song of the Year goes to the songwriters who crafted the lyrics and melodies. Since this category tends to lean towards big hits and big artists, it never hurts to look at what and who was popular this year. By far, the track that had the most weeks at #1 was Robin Thicke's "Blurred Lines" with Pharrell & T.I. It defined the summer and fits in the same mold of respectable mega smashes such as Usher's "Yeah!", Adele's "Rolling In The Deep" and Gotye & Kimbra's "Somebody I Used To Know" in that ordinary consumers could perceive them as more than just soulless pre-manufactured pop hits. Despite the Marvin Gaye issues and Miley episode at the VMAs, I still like the chances of "Blurred Lines."

Justin Timberlake will likely have a lot of momentum this year for his return with The 20/20 Experience, which should carry over into ROTY with "Mirrors." He's one of the most adored pop stars we have and I think it would count as a huge shock if he didn't get in here.

Another artist who will also likely carry some goodwill for a great year is Bruno Mars. He has been a mainstay on the charts for about a year now, which helps the chances of "Locked Out Of Heaven," a song that was released closer to the beginning of this year's eligibility period than any of the other main contenders.