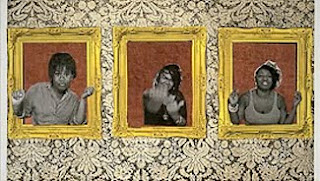 Some of the imagery here is of a galactic nature, with references to the mothership, stars and such. Not uncommon at all in pop music, but very fitting since every listen to "The Story" feels like a journey beyond space, possibly on an astral plane. There's a magic going on here that's hard to explain, but something about paving your own path and following your own heart spoke loudly to the dreamer in me, in the sort of way that my favorite songs of all-time do. We sometimes have a tendency to sneer at anything that's purposefully positive in this world. Perhaps it's out of jealousy or maybe because we simply don't like being told how to feel. Whatever it is, I implore any cynics to not let that get in the way of enjoying this song. There is too much warmth in those keyboards and too much love in the harmonies to feel anything but empowered when your heart is fully opened to this track. In the seven years I've been doing these lists, never have I been this sure of what my #1 single would be.

These are my favorite albums of 2011. This year, I'm trying something different by bringing Spotify into the mix. I've created a playlist with a song from most of the albums here. Check back next week for my list of the best singles of the year.

On his 2008 album, The Way I See It, Saadiq copped a retro sound that recalled some of the softer, romantic touches of Motown. As enjoyable as that album was, it often felt like a tribute instead of a creative exercise. For the follow-up, the sound is still of the past and just as accurate, but more soulful, freewheeling and raucous. By convincingly conjuring up the spirit of Stax and the eclectic side of Sly and The Family Stone, Stone Rollin' would have been pleasing to the ears of most by default as well. Instead, Saadiq completely reinvigorated the whole process of being retro by using the era not to justify the means, but as a catalyst for exploring just how vibrant his songwriting could be. The authenticity is part of the charm, but the joy lies mostly in listening to one of R&B's most intelligent and classiest artists at the top of his game.

Year-End Stuff and Best of 2011 Lists

It's about that time for best of lists. Next week I'll be doing albums and the week after that is singles. In the meantime, you can check out my 2010 lists for albums and singles. My movie list usually shows up sometime around February, so here is last year's too.
Posted by Ivan at 12/13/2011 10:22:00 AM No comments:

Are The Grammys Now Relevant?: My Reaction to the 2012 Nominations

The nominations for the 54th Grammys were announced tonight and there was no shortage of surprises (click here for full list). The precedent for past Grammys has been thrown into disarray and this could be the sign of a new era for the ceremony.

First, let's look at the obvious. Song of the Year nominations were conceivable for Mumford & Sons and Bon Iver, but for both of them to take slots in Record of the Year speaks loudly as to how the NARAS are trying to shake things up. Usually when there are surprises like this, it comes from the result of a weak year, but there were several other viable contenders that fit into the previous mold of commercial and critical acclaim (think "Super Bass," "Pumped Up Kicks," "All The Lights"). In spite of that, the NARAS seemingly went straight for critical acclaim in a category that rewards big records. It looks as if Arcade Fire's win for Album of the Year was no fluke and the blue ribbon panel is willing to overlook sales in favor of merit. "The Cave" was a much more feasible choice because of its success at radio, but "Holocene" did not gather much attention outside of the indie press and its inclusion here is colossal.

In another cred seeking move, the Best New Artist category this year has two hip hop artists (J. Cole and Nicki Minaj), which is a first and a "dubstep" artist (I have nothing against Skrillex, but I'd rather not disrespect the genre by identifying his music as such). The Skrillex nomination is most interesting because he is at the head of a movement that has a very devoted fanbase but hasn't really broken through mainstream America. Once again, this is not typical behavior of the Grammys. They've apparently been paying attention to what's current and have adjusted accordingly.