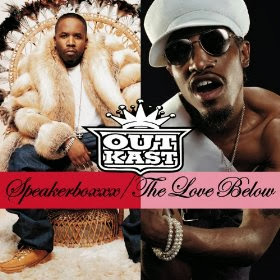 When I think about what it was like during the time Outkast's fifth album, Speakerboxxx/The Love Below, was released, I can't recall ever sharing such a huge amount of optimism and trepidation concerning a project. Coming off the smash Stankonia, which was so hugely popular that it became one of the few hip hop albums up until then to be nominated for Album of the Year at the Grammys, expectations were stratospheric. Outkast had managed to make each successive album contain fewer borders, rarely taking a step backward when it came to trying new things. By the time Speakerboxxx/The Love Below came around, the dusty, buttermilk-battered funk of their debut Southerplayalisticadillacmuzik was but a distant memory and only served as a slight reference point to the foundation of their sound. The increasing eclecticism no doubt helped to expand their audience and it was reasonable at the time to expect that their latest double album would be nothing short of mind-blowing.