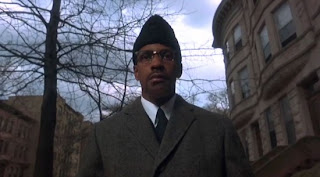 As a huge fan of music and film, one of my favorite techniques in cinema is when a song is used to score a scene for enhancement. When done correctly, it elevates both the song and the movie into a heightened connection with the audience. Martin Scorcese, Quentin Tarantino and Wes Anderson are just a few of my favorite filmmakers who have both perfected this and have also created classic moments that are forever linked with a song (think of the Rolling Stones' medley during the "last day as a wiseguy" scene in Goodfellas or "Stuck In The Middle With You" from Reservoir Dogs).

While Spike Lee is among the most visually distinct filmmakers of his generation (hello dolly), I've also been very drawn to his choice of music in film. Just as much as the previously mentioned directors, Lee uses songs that we've long been familiar with and heightens whatever layers we've already associated with them, while also bringing to light some new ones. This year, he's delivered a new film, Red Hook Summer and the upcoming Bad 25 documentary. I figured now was as good a time to look back at the best of those moments. For all of you School Daze and Mo' Better Blues fans, I didn't include anything from them since they were mostly musical numbers and not scenes where the music served as the background. Opening credit sequences don't count either (sorry Rosie Perez and Public Enemy). ***SPOILERS AHEAD***

Disclaimer: I couldn't provide videos for all the scenes I discussed, but I hope you'll enjoy the ones I was able to embed.

The usage of Seal's "Crazy" and KRS-One's "Outta Here" in their respective scenes were much more dynamic and attention-grabbing, but I was really struck by the restrained approach employed here. Detectives Klein and Mazzili (Harvey Keitel and John Turturro) arrest Rodney (Delroy Lindo), a notorious but low key drug dealer in the middle of the day for the entire neighborhood to see. We know that the detectives are doing this to increase tension between Rodney and one of his main workers, who is a person of interest in a murder case. The three veteran actors provide the scene with more than enough weight and the light sound of "Newborn Friend" almost signals a shift in power of the movie. It sticks out from the hip hop heavy soundtrack and its appearance is immediately noticeable.