Once again, I'm liveblogging the Grammys. Check back often for commentary, analysis and to see how I fared with my predictions.

7:01 Is it me or does Lady Gaga's eye make-up look very similar to Sting (as in the pro wrestler). Pretty great choice to have her kick off the show though. Much better than U2 last year who weren't even nominated or had an album out at the time.

7:04 Elton John joins Gaga onstage for a duel piano duet of "Your Song" after a spirited performance of "Poker Face." Elton is "Gaga-ed" up, more than less. He's got that glitter shades and smeared make-up over his face. If there's any male singer who can get away with being "Gaga-ed" up, it's Elton John.

7:07 The sad thing about that performance is that it didn't even come close to one of Gaga's best, but it's probably one of the more interesting performances the Grammy telecast has had in sometime. 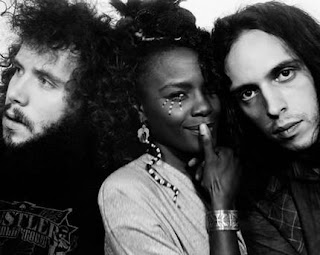 I've been tabulating my lists in a new way this year. I still go by the same criteria of how I feel in regards to ranking, but I wait till I'm done now before adding numbers, where as before I added the numbers as I went along. It would often cost me a lot of time once I remembered a single I had forgotten to add and I would have to reorder the entire thing. So basically, I ranked the songs without keeping track of how many there were. Once I got down to adding numbers to the rankings, I found out that I had more than my intended and traditional 200. The number 200 has always felt natural for me when concerning singles. It's a perfect cutoff point to prevent anything that I care little about or can't defend from sneaking in. But when I looked at some of the songs I ranked below 200, I couldn't stand to exclude them because I felt there was a lot of strong stuff. Which brings us to 250 singles this year. How did I know that 250 was the right number? My #251 would have been Flo Rida's "Right Round." I felt that then was the time to quit.

The joy of "Wild Young Hearts" lies in its simplicity. It tells a story that we've heard before many times. Lead singer/bassist Shinga Shoniwa plays the role of a regretful heartbreaker who can't be tamed, and to make matters even more familiar, it's all done with a 60's inflection, but it's the song's simplicity that makes it so perfect. It's an immaculately crafted pop tune that could sound just as fresh today as it probably will 10 years from now.
Read more »
Posted by Ivan at 1/19/2010 02:30:00 PM No comments:

Once again, here are my top 50 albums of the year, along with an honorable mention list. Just my way of trying to share as much good music as I can. I found everything there enjoyable in one way or another and couldn't bare for them to go unmentioned. As usual, the singles list will follow shortly.

EDIT (1:02 AM): I've added a playlist of select tracks from the list at the bottom so that you can sample the songs.

There was potential on St. Vincent's debut, Marry Me. Actually, there was more than potential—it was a pretty damn solid album. I held certain songs, such as the title track, "The Apocalypse Song" and a few others in very high regard, which naturally led me to anticipate her follow-up even though I wasn't in love with the debut. Actor is the kind of leap forward that you hope for from most artists on their second album, but would be lucky to get. The album takes some of Marry Me's darker moments and builds an entire album around that vibe. Annie Clark's darkness isn't the dour kind, but one built on tension and unease while only tempting to cross the line in to creepy. It's an exquisitely arranged album where even the most tender details matter for the mood. Marry Me proved Clark's talents: her musical proficiency, a delicate expressive voice and a confident lyrical style that mixed wit with emotion, but Actor proves that she can deliver a full-length full of highlights.