Enjoy the list. Enjoy and share anything new you discover. Enjoy the time that we're living in that we have an unending amount of quality music out there Enjoy the Spotify playlist and enjoy my singles list which will be up pretty soon. 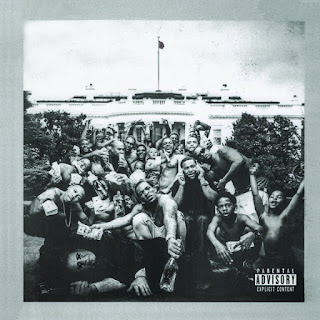 1. Kendrick Lamar - To Pimp A Butterfly

The consensus on how great this album is so overwhelming that I'm not even sure how to approach it in a way that no one has yet, so I'll just name my top ten favorite moments instead:


10) The first time you hear Thundercat's harmonies in the background during "Complexion (2 Zulu Love)."

9) The placement of "You Ain't Gotta Lie (Momma Said)" so late in the album sequencing as a brief palate cleanser between some of the heavier material.

7) The conversation between Kendrick and 2Pac on album closer "Mortal Man," which puts the whole experience into context. It's as if To Pimp A Butterfly was an essay about what it's like to be African-American in 2015 submitted to be graded by Professor Shakur.

6) The first time the chords move up a half-step in "King Kunta" as Lamar lambastes rappers employing ghostwriters.

5) Every single vocal inflection Anna Wise does on "These Walls" and when Bilal bursts through during the chorus.

4) The moment the beat drops on "Alright" and you feel like you can take on anything the world has to throw at you.

3) The last verse of "The Blacker The Berry."

2) The audacity of rapping over the jazzy time signature of"For Sale (Interlude)".

1) The gravity when you finally reach the end of "How Much A Dollar Cost?"

The jig is up, I seen you from a mile away losin' focus
And I'm insensitive, and I lack empathy
He looked at me and said, "Your potential is bittersweet"
I looked at him and said, "Every nickel is mines to keep"
He looked at me and said, "Know the truth, it'll set you free
You're lookin' at the Messiah, the son of Jehovah, the higher power
The choir that spoke the word, the Holy Spirit
The nerve of Nazareth, and I'll tell you just how much a dollar cost
The price of having a spot in Heaven, embrace your loss, I am God"

Considering that we know how the life of founding father Alexander Hamilton turned out, it doesn't make his death any less emotional on the Broadway cast recording of the smash musical that bears his name. Forget all the hype. Forget the refreshing (and much deserved) employment of hip hop for a musical. On the surface, scribe and lead actor Lin-Manuel Miranda took on a chapter of American history that we're already familiar with and breathed a contemporary life into it while managing to both educate and make us empathize. One of the soundtrack's great accomplishments is that Aaron Burr, who as he puts it in "The World Was Wide Enough" is the "villain in your history books," becomes as much a sympathetic character as Hamilton by the time it's over. That's just one of many fascinating wrinkles to history over the course of the show and what makes it one of 2015's most tear-inducing efforts. It's also one of the year's most exhilarating listens as we chart the title character's rise from destitution to triumph in clever fashion and more than a few tricks from classic musicals of the past. At the root of its foundation, Hamilton is a show that prides itself on being fluent in hip hop. Taking into account the incredible logophile nature of the genre, it's shocking that it's been this long for Broadway to embrace it.

It happens during the middle of the album on "Texas Funeral" where lead singer Frances Quinlan stretches her vocal cords to incomparable lengths. The bulk of Painted Shut involves Quinlan going above and beyond regularly to get across various emotions, but it's on that track where you're not sure how much more a person can do before they completely lose their voice. It's taxing and draining to the point where you're spent and it was easily one of my favorite sounds of the year. Quinlan's voice, and Hop Along in general, has an aesthetic that's very reminiscent of the '90s, with harmony and melody cutting through dark themes and abrasive guitars. Pack in some memorable choruses and it's as if the Buzz Bin never left.

It's one thing for an artist to proclaim Prince, Marvin Gaye and Sly & The Family Stone as their inspirations, which D'Angelo and many others have done before in the past. It's another to utilize the best aspects of their work and actually be the one that the torch is passed to. The timeliness of What's Going On. The sleek musicianship of 1999. The weirdness of There's A Riot Goin' On. It's all here on Black Messiah, which presents the best case yet in D'Angelo's career that he is the valedictorian of soul studies. On the opening cosmic funk of "Ain't That Easy," we still get a tiny bit of the haziness that made Voodoo a classic so many years ago through D'Angelo's vocal delivery, only this time the guitars have a more aggressive tone and the sounds cut through more clearly. The effect is rooted in the past, but not so bound by it that it only shoots for the obvious nostalgia identifiers. That connection to the legends isn't just an aural one, but also a spiritual one where it's not hard to imagine D'Angelo listening intently to deep album cuts, searching beyond all just traces of radio reverence. You become a diehard fan by spinning an album from beginning to end and absorbing everything in between. With neo-soul no longer around as a marketing tool, that's exactly what D'Angelo has proven himself to be. From the slow burn of "Really Love" to the rousing closer, "Another Life," Black Messiah was a reminder of the power soul music can have when done with such expert craftsmanship and care.

The bedroom pop dreams of Claire Boucher could no longer be contained by the time we got to her fourth album, Art Angels. The atmosphere of her previous album, Visions, whose claustrophobic nature had its own powerful beauty, was nowhere to be found as Boucher tore down those four walls and reached for the galaxies. There's a bounty of clear-cutting keyboards and enchanting harmonies mixed in with the kind of experimentation we've come to expect from Grimes. It's that sweet spot between Kate Bush and Madonna & Janet Jackson with all of the ambition of someone ready to take over the world, which rears its head so many times, especially in tracks like the confident "World Princess Part II," the synthpop funk ode to Montreal, "Artangels" and "Flesh Without Blood", which was a near four minutes and a half demonstration of Grimes' newfound superpowers in the studio and one of the most thrilling listens of the year.

On her 2013 single, "Avant Gardener," Aussie Courtney Barnett sang of how she much preferred the mundane to humorous results. That line could serve as her mission statement since the smallest of observations and existential musings makes her debut full-length album one of 2015's most enjoyable and funniest listens. Like the best Seinfeld moments, Barnett riffs on a variety of things from buying a house in the suburbs to a disheveled young man being mistaken for a suicide jumper, all with a keen eye. Her comedic beats land so precisely that it wouldn't seem that far-fetched for her to land a sitcom on HBO or FX down the line. Musically, Sometimes is a mixture of '60s psychedelic pop and '90s alternative rock that is a more than apt canvas for Barnett to show us the world through her eyes. The details of her lyrics are given the same amount of room similar to other like-minded singer-songwriters from decades ago and her slacker delivery often serves as catnip to the Generation X crowd. With a Best New Artist nomination already in tow, I can't wait to see how she tackles life with an increased spotlight.

The statement is in the title of the album itself. When your running time is not that far off from Doctor Zhivago, being taken on a journey is mandatory. This triple album effort from saxophonist and composer Kamasi Washington provided a crash course in the history of jazz running the gamut from the expansive experiments of Sun Ra to the classic bop of Coltrane. It all comes off like the world's most lavish jam session, but with aspirations set in the clouds. While taking it all in each listen may seem like an intimidating task, the sum of its parts, including standout tracks like "The Rhythm Changes" and "Cherokee" is hard to deny. For what it might lack in connecting themes, The Epic is still one of the premier music experiences of the year, if only because it showed the possibilities of what can can happen when you let an imagination run loose.

"You're gonna run, it's alright, everybody does." That line towards the end of "Everybody Does" from the debut album has the effect of a candle in an already dark room finally flickering out. A brief clarity comes when the song title appears and before everything else can be added into context, you've been punched in the gut. The true beauty in that line is how Baker lays out how imperfect she is and comes to terms with it in the most simplest of ways. Sprained Ankle is all about revealing imperfections in that manner, whether it be drug abuse or an overall lack of hope, nothing is romanticized; it's just presented at a surface level for pure therapeutic reasons. In between a few dramatic flourishes that recall Explosions In The Sky with an eighth of the budget and personnel, the somber guitar work stays minimal so as to let Baker's experiences linger around uncomfortably, yet always beautifully.

One of the most unheralded artists of the day, Van Hunt continues to churn out low-key stunners that are too weird for R&B fans and not contemporary enough for hipsters. I could go at length about how following his own creative muse has earned him a loyal fan base that will practically follow him anywhere, but that doesn't give enough credit to the quality of his work. Eleven years after his debut album, Hunt is still finding ways to surprise on songs like "Emotional Criminal," which doesn't belong purely to just one genre and the enigmatic funk of "Teach Me A New Language." There is no appealing background story here that could be easily blurbed and regurgitated on a few dozen sites to draw you in: it's just simply an artist who's a master at his craft consistently doing what he does best.

So much fun was had with psychedelia on 2012's Kaleidoscope Dream that Miguel decided to invest in even more lava lamps and effects pedals for the follow-up. Add to that his already hormone-provoking voice and you've got the ingredients for one of the sweatiest albums of the year. With the volume cranked up a little louder, the passion on tracks such as "Coffee" and "FLESH" stayed at a full blown sizzle and found Miguel even more overt with his advances. Even though the music reflected an increased focus on the bedroom, Wildheart still found time to explore the world outside in "what's normal anyway," detailing the difficulties he had growing up biracial and the cautionary tale of "Hollywood Dreams." They served as a healthy reminder that Miguel was and still is a well-rounded songwriter in addition to his obvious strengths.